Continuing my thoughts on High Southern Culture.  It’s easy to say that the South had slavery so the South is racist forever.  Let’s put that aside for the moment.  It’s easy to beat up the modern South on racism, real or alleged (google the Christian-Newsom murders).  My point in this post is aside from a few Northern ideologues, a more refined and polished racism is in the Yankee elite, both then and now. Southern Racism is crude and barbaric.  Yankee racism is polished, scientific, and refined.  In other words, the theory of evolution applied to social situations.

(And by “Yankee” I do not mean anyone North of the Mason-Dixon line.  I am using it to refer to the cultured and social elite focused in a few Northern cities)

At this point in the debate a lot of well-meaning Southern apologists will (correctly) point out, “Yeah, but the North has some nasty aspects of racism, too.  The KKK has as many rallies in the North and they carry the US Flag as much as the Confederate flag.”  All of that is true, of course, but it rarely convinces anyone.  As an aside I will put the high number of Freemasons involved with the Klan.  Interestingly, Rocky Branch, a town just north of here, has both a moderate Klan presence and a large number of Freemasons (the Baptist church in said town has Masonic insignia inscribed in the foundation stones; a friend of mine was literally driven from that town for speaking against the Masons). 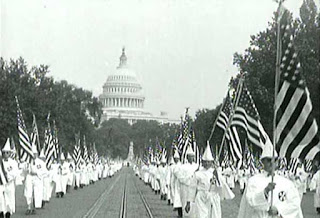 (I don’t see any Confederate flags)

In some ways that points to the irony of Southern race relations, an irony ably captured by Professor Ralph Wood (Flannery O’Connor and the Christ-Haunted South).   The essence of his argument was that the Southerner might say mean things about the Negro and probably couldn’t make sense of the race-tainted past between the two, but at the end of the two the white man and the Negro were used to working shoulder-to-shoulder.  The Yankee, by contrast, started out with grandiose ideas about the social equality of man (an equality, incidentally, which is condemned in the Westminster Larger Catechism on the Fifth Commandment) but generally despised the Negro in practice.  Here is proof:  what is the difference in demographics between the KKK’s neighborhood and a white liberal’s?  Nothing.

At this point a lot of well-meaning Southerners will say, “But I have many black friends” or “I’m not a racist, but…”

Whether the above sentiment is true or not is irrelevant.  It just sounds so “fake.” By employing that defense you are buying into the PC-Yankee narrative.  Just bypass that narrative altogether. (For the record there are as many blacks in my general neighborhood as whites.  Which white liberal can say that?)

So where does the South go from here? It’s hard to say.  The Obama administration acted as a catalyst that woke many conservatives out of their slumbers.  It would be foolish to make prognostications when the reality changes so quickly.

This is likely the next book I am getting.

Several of my Orthodox friends have been attacking Blessed Seraphim, some even calling the “Young Earth Creation” as “stupid.”  (It gets really funny in the debate when I start lining up holy fathers who espoused something like it!).

I’ve held off buying it because I’ve been interested in the “paleophysics” school for a few years.   After watching it dive off, not simply into wackiness (which is no different from the modern University system), but into apostasy, it’s time to call it for what it is.  More on this later

(While rejecting paleophysics per se, I am not rejecting all forays into alternative ancient history.  I still think it is silly to say that a bunch of loincloth slaves built the pyramids;  yes, yes, I know, affirming this makes me a “Sitchenite,” or something like that, which I am not).