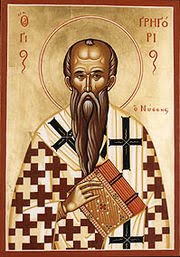 While I didn’t plan it this way, every year towards May I begin (re)reading the Cappadocian Fathers. In May 2008 I was reading Gregory Nazianzus’s Five Theological Orations. I had no idea at first why I wanted to read it. I had just finished Reformed theologian Robert Letham’s book on the Trinity, and he said Nazianzus was good, and so I bought it on the cheap. And it was a good read, albeit at first a bit foreign to my thinking.

Fast-forward a year later. I decided to reread Nazianzus. I picked up a lot more of it this time and it truly was a rewarding read. Now, I am reading through St Gregory of Nyssa’s Against Eunomius, one of the milestones in Trinitarian theology. I had long wanted to read Nyssa because David Bentley Hart long has championed Nyssa as a Patristic response to both rationalism and post-modernism, and since Hart has a beautiful writing style, I assumed so would Nyssa.
I was wrong. I’ve been trying to read Book 1 of Against Eunomius for six months. I just couldn’t get into it. A few months ago I decided I simply wasn’t ready for Nyssa (and to be fair, it is rather intimidating: 300 double-columned pages of relatively small print!). In the meanwhile I began reading background studies and debates concerning the Cappadocian Fathers. I read (at least the first 425 pages of it–all that was available on Google Books) Joseph Farrell’s God, History, and Dialectic: The Theological Foundations of the Two Europes. Farrell helpfully summarized the issues and themes that Nyssa dealt with. That helped a lot. I also read parts of Meyendorff’s Byzantine Theology, especially where Meyendorff dealt with the essence and energies of God. (you can get Meyendorff for free, here).
Having done all that, I picked Nyssa up again. And no surprise, it was relatively easier. So I am going to use my reading of Nyssa to summarize some of the Trinitarian issues at stake over the next month or so.

The nature of being is becoming. All created things are becoming–in motion. History, being part of time, is created. Therefore, history is in motion and has a telos. This is part of St Maximus’s Ginesis, Kinesis, Stasis, all of which are logoi set in motion by the Logos. Likewise, there is a triadic pattern to humanity: man has a beginning (arche), middle (mesotes), and end-goal (telos).

Three “whos” and one “what,” with each “who” being fully “what.” Who (person) is not the same category as “what” (essence). Likewise, this triadic pattern can be applied to man. The “whos” (people) share a common “what” (nature): each person has a soul (soul and person are not the same thing).

Each person particularizes human nature in its own mode of existence.

According to Farrell, they “tear their being apart into oppositions which were never natural.” They make distinction between person and nature an “opposition.” They pass on this opposition to their children–death. (I think this makes more sense of the Adam-Christ parallels in Romans and Corinthians; Christ undoes Adam more by bringing Life).

In one of St Basil’s letters–the famous one where he differentiates ousia and hupostasis–he says that in the Trinity there is no “void” or “interval.” What does he mean? I think he is saying that there is no “space” and/or “time-lapse” in the Trinity. Part of this refutes Arianism, denying “there was a time when the Son was not.”

But a problem arises: if there is no interval in the Trinity, no “gap” between the members, if you will, then how do we differentiate Father and Son and Holy Spirit? I think there are a few ways to see an answer on this:

1. The Church has always taught perichoresis, or mutual indwelling. The members of the Trinity, as Stanilaoe says, “copenetrate” and indwell one another.

2. This could be what Zizioulas (I’m not even going to pretend I spelled his name correctly) meant by “Being is communion.” Ontology linked to fellowship. Interestingly, the Romanian word for “word” (convint, I think) comes from the Latin word “convectus,” which means “come together.” According to some Romanian thinkers, you can’t have “words” without fellowship, without mutuality.

The Father can’t be a father without a Son.

More of notes on Postmodernism and Trinity:

Okay, that will work for now, but a few things are in order: I need to nail down what the postmodernist really means by “differance” (I have my copy of Derrida’s On Grammatology on my desk).

St Cyril gives a thorough introduction to the Christian Faith. While not as polished as a later Cappadocian, his views and practices (though not original with him) have remained unchanged for the last 1700 years. Of particular note is his mystagogy on the Sacraments. I particularly liked his view of eschatology which has the saints wrestling with Satanic personas in the latter days (think NATO, EU, Rockefellers, Rothschilds, etc).

St Gregory of Nazianzus is best known for his Cappadocian defense of Trinitarianism. Each Person is God because each is consubstantial. The unity of the Godhead is maintained by the monarchia. From the Father flows the unity and being of equals. The Persons of the Trinity are distinguished by properties, not by nature. If we use the term “greater” in outlining the Monarchia, it is in reference to “origin” and not to “nature.”

Post-Cartesian Protestants like to claim the early Church for their own, including a heroic Trinitarian like Gregory Nazianzus. Fair enough; let’s see some of the stuff he believed. (Remember, you can’t claim “oh, he fell into error and apostasy” on one hand while saying he has good Trinitarian theology on the other hand).

1. Gregory believes that departed saints pray for us (implying, no less, our invocation of the saints; Oration 18.4)
2. Angelic powers aid our current efforts (Oration 40:36).
3. Angels really are in the Church during worship, and not just “mentally” or “spiritually” (Oration 42:9).
4. Worship services should be patterned after the angelic model outlined in Hebrews and Revelation (43:52).

Go make of that what you will.

I am rereading Lossky’s In the Image and Likeness of God. I read it last year but really didn’t know the issues involved. I need to really hammer down what I believe about Triadology. Apostolic succession, Eucharist, liturgy–that’s wonderful but keeping the discussion at that level means that Roman Catholicism is just as viable an option–which it is not. The Filioque, Triadology, and Absolute Divine Simplicity are the issues upon which the debate hangs. They are “deal breakers.” The following is from Lossky’s book. I am going to spend future posts unpacking these two pages.

According to St. Maximus, God is “identically a monad and a triad.”{24} He is not merely one and three; he is 1=3 and 3=1. That is to say, here we are not concerned with number as signifying quantity: absolute diversities cannot be made the subjects of sums of addition; they have not even opposition in common. If, as we have said, a personal God cannot be a monad– if he must be more than a single person– neither can he be a dyad. The dyad is always an opposition of two terms, and, in that sense, it cannot signify an absolute diversity. When we say that God is Trinity we are emerging from the series
of countable or calculable numbers.{25} The procession of the Holy Spirit is an infinite [85] passage beyond the dyad, which consecrates the absolute (as opposed to relative) diversity of the persons. This passage beyond the dyad is not an infinite series of persons but the infinity of the procession of the Third Person: the Triad suffices to denote the Living God of revelation.{26} If God is a monad equal to a triad, there is no place in him for a dyad. Thus the seemingly necessary opposition between the Father and the Son, which gives rise to a dyad, is purely artificial, the result of an illicit abstraction. Where the Trinity is concerned, we are in the presence of the One or of the Three, but never of two.

The procession of the Holy Spirit ab utroque does not signify passage beyond the dyad but rather re-absorption of the dyad in the monad, the return of the monad upon itself. It is a dialectic of the monad opening out into the dyad and closing again into its simplicity.{27} On the other hand, procession of the Holy Spirit from the Father alone, by emphasizing the monarchy of the Father as the concrete principle of the unity of the Three, passes beyond the dyad without a return to primordial unity, without the necessity of God retiring into the simplicity of the essence. For this reason the procession of the Holy Spirit from the Father alone confronts us with the mystery of the “Tri-Unity.” We have here not a simple, self-enclosed essence, upon which relations of opposition have been superimposed in order to masquerade a god of philosophy as the God of Christian revelation. We say “the simple Trinity,” and this antinomic expression, characteristic of Orthodox hymnography,{28} points out a simplicity which the absolute diversity of the three persons can in no way relativize.

No, because Letham is a good Christian thinker. However, given his arguments against the East in Holy Trinity, it’s hard to see how he avoids it. Letham writes, criticiszing Vladimir Lossky,

Lossky’s doctrine of the divine essence…actually contradicts the historic Trinitarian doctrine. The essence is above the persons, as Lossky presents it. It is superessential. Yet Lossky can also say that God is greater than his essence. Lossky wants to have his cake and eat it, too.

Letham has several problems with this. First, he’s bothered by Lossky’s (and the East’s) insistence on the essence/energies distinction. Let that slide at the moment. He says by saying God is “above being” we introduce a new category into the Trinity. This isn’t that bad an objection, really. This is the same argument he makes against Bulgakov’s Sophiology. And Lossky makes similar arguments against Bulgakov. More on that below.

But Letham should consider if we do not place God above being, then we end up identifying God with being (this was Heiddeger’s blistering critique against 20th century theology, his Nazism notwithstanding). If you identify God with “being,” the problems are numerous: an abstract God, a limited God, an idol. And with this argument Heiddeger thought he had nailed Christianity. But Heidegger had never read the wild Trinitarianism of the Eastern Fathers. He didn’t know of Dionysius’s God outside being and St John of Damascus saying that God exists outside himself.

Long before Heiddeger the Eastern Fathers had already anticipated and silenced him. Therefore (back to the discussion), Lossky is correct in positing God outside himself. Or rather, God existing above being.

If all of this is true, then is Bulgakov wrong for introducing Sophia = ousia = glory? No. Bulgakov might be wrong for identifying person and essence (Aquinas does the same thing, but never mind). Given the trickiness of God’s relation to being, I think Bulgakov’s sophiology is quite helpful.

For a thorough discussion, see Jean-Luc Marion’s God Without Being.