I have been blogging at Blogger for the past year.  I might have a new project in the works at WordPress on the healing of the human person, evangelism, and the like drawing upon the Patristic tradition.

sorry to keep doing this

I’m keeping this up but changing my whole project.  trying to be more irenic or something.

And I am a monarchist again.  That is not accidental with the title of the new blog.

I’ve gotten rid of a lot of titles on here because I just don’t see how…well, I’m not going there.  And I’ve changed some works by some authors.  I think Solzhenitsyn’s Gulag Archipelago is far more powerful and infinitely more relevant to FEMA-Camp America than are his novels.  I’ve BOLDFACED the ones I have already read.

I posted my Musings on Methodius on Puritanboard.   They didn’t like my dichotomy of Hebrew vs Hellenic thought.  I’ve spent almost a decade reading Greek (pagan and Christian) sources.  What I say is beyond dispute.  I’m also (not) surprised they didn’t take up the line of Methodius’s neo-Galatian two-class Christianity, but enough of that.

I’m fairly harsh on the Fathers for the idealization of angelic celibacy.  But as I reflect upon it, I can kind of get where they were coming from. They lived in a decaying, overly sexualized debauched culture of the late Roman Empire (nominally Christian or not).  The appeal to monasteries fairly obvious:  faced with starving poverty, unfulfilled sexuality, and lack or order, monasteries offered a stable alternative.  Does that justify later monastic trends?  Of course not, but it’s worth remembering.  If the Fathers were over-reacting to what is below, then I can understand, even if I do not approve.

Banquet of the Ten Virgins

Like many ancient Christians, Methodius held perpetual virginity to be the summum bonum.  Unlike other ancient Christians, his defense of it, while suffering in terms of exegesis and argument, is the best-written defense (Augustine’s is confused and he knows it; Tertullian’s ranks as the worst treatise in the history of written thought).

It is not accidental that Methodius used OT legal shadows to buttress his argument.  He picked and chose from God’s law and supplemented it with the doctrines of man.   Gone is the freedom of the Christian life.  Indeed, the Gospel has become a New Law (348-349).

This is an important text because it summarizes ancient thought on freedom and necessity.  What is the origin of a human action (357).  Methodius wants to make sure that God is not the author of evil, but without the categories of “ultimate and proximate causality,” it’s not clear he can avoid giving evil a semi-independent existence.

His larger point is worth considering, though.  The form of necessatarianism he fights is some mixture of astrology and fatalism.  Methodius wants to free God from the charge of evil by noting he is separate from matter.  (Nota bene:  in ancient thought matter and necessity were linked.  It makes sense if you think of it.  If the above two are connected, and the will is immaterial, then the will is free).

As a full treatise on freedom it is inadequate, but his suggestions on matter and freedom are quite interesting.

“and preserved his mother’s purity uncorrupt and uninjured” (385).  the last two words suggest Jesus was born miraculously without damaging Mary’s ‘lady parts.”  He “opened the virgin’s womb  and yet did not burst the barriers of virginity.”  While this sounds absurd, it is consistent. The evil for men, per Methodius and ancient Christians, is corruption.   The tearing of the vaginal canal, for example (forgive the rough illustration), is corruption.  Therefore, the Logos, the Incorrupt One, could not have caused it.

The only way to really combat this idea is to attack the original premise.

Many of these are corrupted mss and/or lyrical panegyrics on deceased saints.  Not much of history except we see early Marian devotion.  While this is perhaps uncharitable towards Methodius, one wonders if the point of Jesus in our lives is so we can praise Mary.

Methodius is a good witness to Eastern Christianity before the Nicene Council.  He has some interesting suggestions on free will and determinism.  Unfortunately, he exalts man-made ideas of perpetual celibacy to the first-order level of the gospel.  It is instructive that we see why:  sex–assuming it to be married sex–is messy and smelly and arouses extreme passions between man and wife.  This is low on the scale of being and it does not become the one who wants to transcend finitude to the realms of the passionless.

This is very good Hellenistic philosophy, but is an open attack on an earthy Hebraic Christianity.   Methodius himself suggests as much (see page 344).

He is worth reading for the occasional insight, but even where he is right (e.g., the Trinity) he has been surpassed by other luminaries.  Where is wrong, he is fatally wrong.

People think I make this stuff up.  Now if someone says, “You aren’t reading the context,”  fair enough.  But if we have to qualify it with “context,” then we need to stop making blanket condemnations of Protestants.

“Whoever denies Orthodox hesychasm is excommunicated by this Council (of St. Gregory Palamas), and whoever cannot understand the hesychastic life shows that he does not have the mind-set of the Church.” Eminence Hierotheos Vlachos, Metropolitan of Nafpaktos

Concerning the necessity of not permitting heretics to come into the house of God, so long as they persist in their heresy. (Canon 6 of the Council of Laodicea)

Do not err, my brethren: if anyone follow a schismatic, he will not inherit the Kingdom of God. St. Ignatius Of Antioch, Epistle to the Philadelphians, 3:2-4:1

He that saith not ‘Anathema’ to those in heresy, let him be anathema. (Seventh Ecumenical Council) [I can agree with this statement depending on who means what by heresy]

Neither the Papist nor the Protestant church can be considered as the True church of Christ. The first was altered by a number of innovations and the accursed despotism (Primacy) due to which resulted the schism from the Orthodox. The same goes for the Protestants whose innumerable innovations lead to total anarchy and chaos. Only the Orthodox church maintained the teachings of Christ flawlessly without a single innovation (St. Nektarios of Aegina)

Those that are not reborn by the divine grace in the only One, Holy, Catholic and Apostolic Church, they do not consist of (comprise) any church, neither visible nor invisible. (St. Nektarios of Aegina)

This line of posts will be somewhat different.  Normally I go on the attack towards Orthodoxy and such.  Orthodox Bridge recently posted a contrast between theosis and Reformed sanctification.  I have a detailed response to it but I will forego posting it because the author mentioned S. Wedgeworth and Derek Rishmway. Those two gentlemen are far more competent Calvin students than I am.  Secondly, when I don’t comment that site doesn’t really have many comments and gets less traffic.

Today I want to explore the ancient prayers of the church, particularly as they formed personal devotion.  My source is the Orthodox Study Bible (which as study bibles go is better than most, but with a few shortcomings).  I realize this isn’t the only source of Orthodox devotion, but it is the most accessible.

I think it is important to examine these ancient prayers because the content is richly Trinitarian and even in my tamed Americanized study bible, the language is dignified and noble.  Further, imbibing these prayers will provide the devotee with a manner of praying that avoids the tendency to end every prayer with “Lead, guide and direct us” “Lead guide and direct us.”  Etc.

And as I reviewed the OSB NT, I noticed that these prayers lack the appeals and going throughs of Mary.  With the exception of two lines in the benediction, a Protestant can say these prayers without changing anything.

O heavenly King, O comforter, the Spirit of Truth who are in all places and fillest all things.  The treasury of good gifts and the giver of Life.  Come and abide in us, cleanse us from every Stain and save our souls, Amen.

The above is a rather ancient prayer and is worth incorporating into one’s spirituality.  This is only the beginning.

Before people jump to the conclusion, “He’s just a Protestant so what does he know?” please let me finish the review then you can start throwing objections and seeing what sticks. 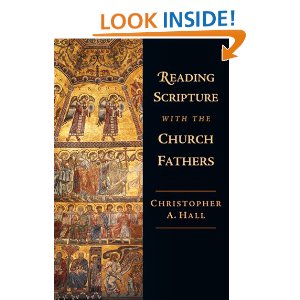 The book turned out much better than I expected it to be. The author avoided anachronisms and the scope of the text, while very limited, skillfully outlined the Church Fathers’ (more on that elusive term later) handling of Scripture.

Christopher Hall argues that Evangelicals should make the Church Fathers routine conversation partners in our interpretation of Scripture. Not to make them the last word, since much of their exegesis is rather forced, but because a regular *re*reading of the Church Fathers provides an important epistemological service: it forces us to examine our own presuppositions and culture as we come to the text.

What is a Church Father? Admittedly, any definition of this term is somewhat arbitrary. Hall summarizes the definition along the lines of someone who has received traditional teaching (Hall 50; cf Irenaeus) and faithfully preserved conciliar conclusions. A Church father must have antiquity, holiness of life (although this can be stretched when it comes to things like temper and gentleness) and orthodox doctrine. Granted, a number of questions are begged at this point, but we must move on.

Hall then survey eight fathers: four Eastern (Athanasius, Nazianzus, Basil, and Chrysostom) and four Western (Ambrose, Augustine, Jerome, and Gregory the Great) and points the reader to certain works. Much of this section is a summary of what you would find in textbooks on the Nicene and post-Nicene period. I won’t go into it here.

He then contrasts the allegorizing of Alexandria with the more literal approach of Antioch.  And while I know that men like Chrysostom rejected the allegorizing approach, I didn’t know how widespread such a rejection was.  Hall gives the standard reasons why all allegories (possibly excluding Paul’s unique usage) are doomed to failure:  allegories by definition are impossible to falsify.

What can we take from the Church Fathers? Unlike modern academic tendencies, they did not divorce the reading of Scripture and the doing of theology from liturgy (happily, with the coming demise of the German-based post-graduate system in America, we might be approaching a period when this is possible).

Even more, the Fathers had mnemonic powers that Americans can only dream of. This allowed them to be remarkably sensitive to motifs in Scripture that a concordance might miss. While Hall doesn’t cover this, to be a bishop in the ancient church one must have memorized the entire Psalter. (And later, to be a Cossack warrior in Russia one must also have memorized the Psalter. When you get captured by Muslimists chanting the Psalter would help you endure torture).

And to be honest, if you want to memorize large chunks of Scripture, you probably need to chant it. Not recite it nor re-read it, but chant it. That’s likely why John Chrysostom had the entire Bible memorized.

As a whole the book is outstanding. Some repetition and for those who have read widely on the Nicene debates, parts of the book can be skipped. On the other hand, this is probably the best introduction to the Church Fathers.

Should the church fathers determine our conclusions about what Scripture means?  No, for a number of reasons:

So again, what point the church fathers?

I know, I know.  He’s a Protestant so he really doesn’t understand Christianity [end sarcasm], but since he has written a cutting-edge book promoting the Fathers, I figured he knows what he is saying.  I plan to review that book later. hese look to be tinteresting.